if only I got on the right train...

I kind of love formats. A friend of mine invited me to see Tenet (2020) in the cinema, which isn't on display yet. While initially I wanted to go the the nearest cinema, he wanted to go to an cinema in a city. But then I wanted to see it on a cool way, you know, on actual film as the past did.

I kind of like a variety of formats. Same thing done differently, with each their own up and downsides.

Anyways, as a test to see if I was capable of the trip, I went to see Dunkirk (2017) in Kino, Rotterdam. I already had seen it on TV, and I really like the movie. The movie was not displayed on 35mm, but 70mm(referring to the width of a single frame). 70mm means that the frame is much bigger than 35mm, resulting in a higher-resolution picture. Together with Eye filmmuseum in Amsterdam they are the only venues that have a 70mm projector in the entire Benelux.1 Films shot on 70mm are rare on its own.

I went by train. I bought the right tickets, but apparently there was a much cheaper ticket I unfortunately completely missed. First there was a major delay at a local station, so someone I knew brought me to a major station with a car so I wouldn't miss the movie. I had a 45 minute buffer, but 30 minutes of it was consumed because of this. Then I accidentally boarded the wrong train and only an hour later I found out. This one also went to Rotterdam Centraal, only with a large detour, I went to Utrecht, Amsterdam South(not central station unfortunately, would've been a lot quicker to go to Rotterdam that way), Schiphol, Leiden, The Hague... and finally I arrived at the station more than a hour after the movie had already started. There was a shower looming when I got out, it was dark and there was a lot of wind. Despite this I arrived at the cinema. At first they wouldn't let me in, offering a refund or seeing a movie on 70mm another time, but after a while they allowed to see the remainder of the movie, no more than 40 minutes. I didn't mind so much because I had already seen the movie and it was more as a test to see if I had enough energy and such.

I haven't been to the cinema in ages, the last time was probably 2015 to see The Martian (2015), so honestly I don't know the difference. However, I can say you can really see some film grain, you see mild flicker on bright scenes, but the lighting is beautiful and you can much detail, like see fibers on cloth and stuff. You can immediately notice if the camera is even slightly out of focus. It really enjoyed it, but unfortunately I was not really immersed into the movie as I arrived so late. Also, it was loud!

After that they let people visit the projector room! 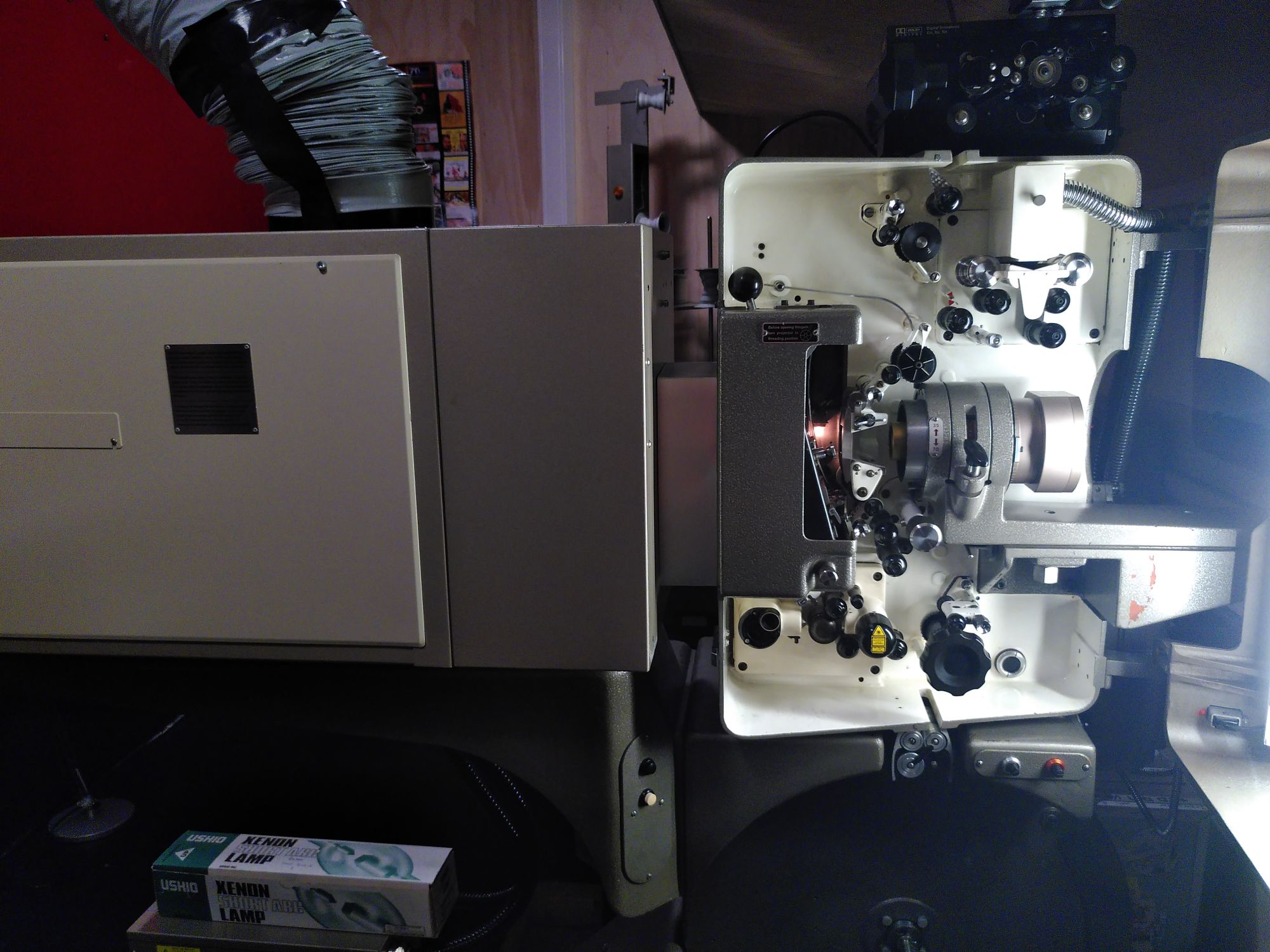 The projector is a Philips DP70, more than 50 years old(There's even a website about this projector!). If you look closely you can see some of the things that guide the film, not sure how it works. Not an ideal photo, but better than nothing. 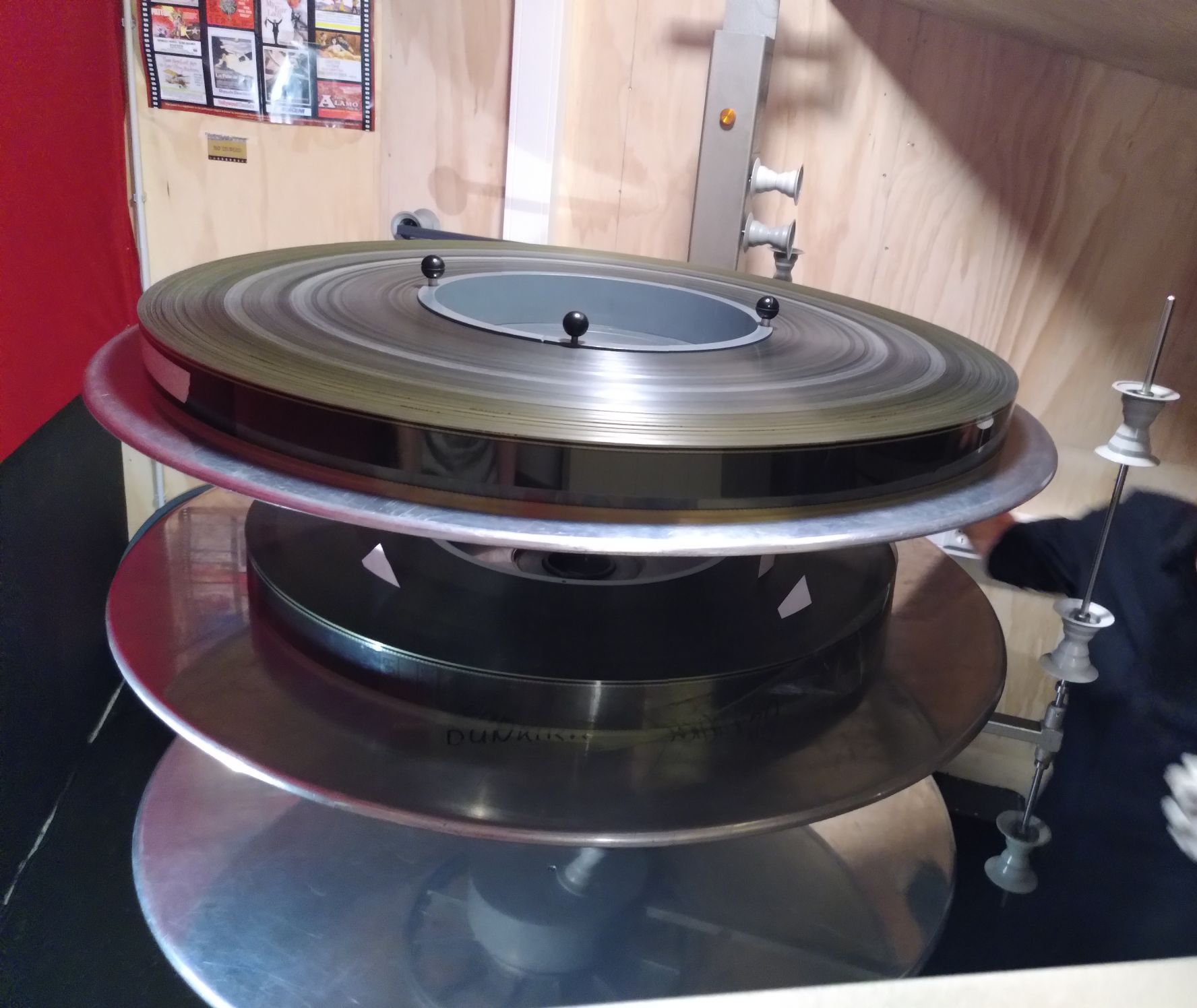 These are the films themselves. Above is Interstellar (2014), below is Dunkirk (2017)(which is written on the film itself, if you look close enough). As you can see they are huge, weighing at least 100 kg, and being multiple kilometers long. Producing such a copy costs more than 30 thousand euros to make the operator told me, let alone producing a film on 70mm, with large, rare and heavy camera's. This is probably one of the reasons why 70mm so uncommon, and why it died a little. And its resurgence probably has to do with... that people simply consider this format as epic!

Also, you can find a photo of a piece of 70mm film here.

The operator told that the white papers inserted between certain parts of the film is to mark parts of the film. The film is divided into parts, and then pieced together. As this was the last time the film was displayed, they would disassemble the film and return it to the owner hired from if I understand it correctly. Again, not sure how the film is delivered and returned. Does the whole film stack thing spin? Perhaps I can ask later.

After that I had a nice dinner at a restaurant. In some ways, the ongoing pandemic has been great. Nearly empty cinema's and restaurants, I can get used to that! But also I notice that people are tired. I notice it myself. I just want to touch people again. I yearn for a hug. But unfortunately the virus does not get tired. Example: In the restaurant, I saw a policeman hug the waitress, they probably knew each other. Despite this, I also saw many people still trying a lot to follow the rules, too. I managed to steer clear of people, aside at a minor occurrence at the cinema. It can be more difficult than it sounds.

Then I went back and took the right train this time. I was tired, but it was a wonderful day and learned a lot, such as preferably not boarding the wrong train.

At first I didn't mind so much I had missed most of the film, as it was an experiment, but as the days progressed I increasingly felt bummed out I in hindsight missed such an epic film on this epic format.