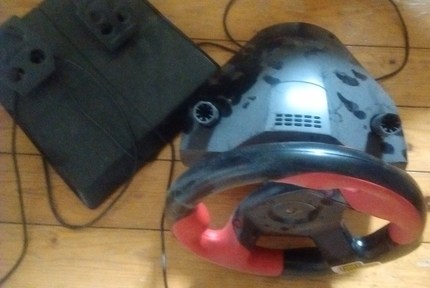 That's right people, I've got this baby from 2000. And recently I acquired Dirt Rally, so I wanted to give it a spin again.

I suck at Dirt Rally, the wheel probably isn't the best, it feels awkward to switch your feet from one pedal to the other, but I had a lot of fun.

How to get it working on Ubuntu

I wanted to see if I could get this working on Ubuntu 18.04. And well, I think it works out of the box. This surprised me, since on Windows 7 it sucks: first I had to find the ancient drivers. After that I installed it and force feedback works. Until you reboot it, then you need to uninstall and reinstall it again. Sigh.

On Ubuntu Linux however, it should work out of the box. To configure it in Dirt Rally, go from the Main Menu to Options. Then Controls. Select "steer left" and steer your wheel to the left. And then do the same for "steer right" and "accelerate" and such. Make sure it doesn't see it as a thumbstick(like the ones on PS/xbox). You'll have to try a few times, what helps is to do it quickly and make a far travel with the wheel. It'll pop up as (invert) X-axis or such. Also, make sure you start the game from now on with the wheel centered in the middle position!

May there be problems, before I tested this I did the following in the shell:

This will test the force feedback. It should move back and forth. Make sure you have the power adapter plugged in.

That's all. I don't know why I wrote this article. Have a nice race!

I also recommend turning down force feedback for collisions in the settings, as I had a few occurrences that a crash made the force feedback go so wild it momentarily disconnected itself and you have to configure it again.

Oh and I bought Dirt Rally 2, however, my computer seems too crappy to run it on Linux. It runs more than playable framerates on low settings, but it stutters. It runs through proton, not native: a step backwards from the original. Furthermore, force feedback doesn't feel terrific out of the box, so I'll have to tweak the settings. Also, IT WAS 108 GB! Also, I have gotten better and Dirt Rally, and I like it a lot and play it occasionally.

I would also like to point out that this ancient steering wheel has served me tremendously well, I bought it used for I think 15 EUR years ago, and I have had much fun with it.