Yesterday I witnessed a solar eclipse. As far as I know, it was the first I observed. Back in 2015 there was a bigger eclipse, but it was overcast.

My expectations were low, after all, it's just a small area of the sunlight blocked, but it was quite cool.

I made a pinhole camera and photographed the eclipse shortly after it's peak(12:29). I tried to photograph it directly through the special solar "glasses" I had, but for some reason that didn't work very well. 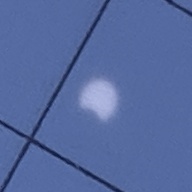 It was nice to view it through these shiny reflective glasses, however, something went wrong. I moved my arm and I accidentally hit the glasses off my head, making them fall of while viewing the sun. For a brief moment I looked directly in the sun with my right eye, and 24 hours later, I still see a black spot when I look at a blank wall and blink with my right eye. I hope I didn't damage my retina.

Also, the eclipse was visible on the solar electricity production:

I wonder how the grid operators are going to cope with this with bigger eclipses in the future.