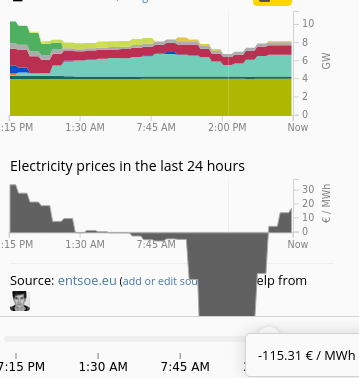 So today I was cycling. And I noticed the few distant wind turbines were not turning. Strange, there's plenty of wind. Perhaps it's the electricity price? it can get low in weekends some times.

I come home, turn on my computer and go to electricitymap.org and HOLY MOLY -78 EUR/MWh?!?! Yes you read that right, that's a minus! Comparison: during normal times at peak demand hours with low renewable energy it can hit 50 EUR/MWh.

I guess it was a perfect storm. Second Easter day - which existence seems solely to create an extra weekend day -, COVID-19 also causing less demand of electricity, and a sunny, windy day: a mix for extreme prices.

Our solar panels at the time were giving back ~3.5 kW to the grid. If the electricity price is to be believed, then we should turn it off. But due to a favorable tax benefit, which automatically reduces electricity given back to the grid from your grid consumption, that would mean you would be a thief from your own wallet. Same goes for turning on your toaster, it would cost the same as usual.

Spain was sitting on a minimum of 17 EUR/MWh however, and Great Britain only was briefly slightly negative during the early morning.

In Belgium it seemed that the old nuclear reactors were unable to throttle down further. It was sitting at roughly 4 GW, meaning that in the worst hour, it had cost the nuclear electricity companies nearly half a million euros.

I will now continue to spit out all my half-baked ideas about the grid:

Mains voltage. The USA mains is (mainly?) 120 volt, and in Europe 230 v. 230 v transports electricity more efficiently. But the USA has 60 Hz, and Europe 50 Hz. And 60 Hz seems to work more efficiently for huge transformers on the grid...

More grid ideas: I have noticed that sometimes there's a lot of renewable/intermittent electricity, but then there's too little demand to use it. But then in the peak hours then there's too little. I thought what if there was this information system, that tells devices that electricity is in abundance - perhaps even including the electricity you're generating yourself -, and that the freezer can go into superfrost or something. Or tells electric cars(on schedule) to charge faster/slower based on supply. (PH)EVs alone should make a difference. My father uses a station PHEV that has a best case range of 45 km, and its battery takes ~4 hours at ~3 kW from empty to full(well probably not the entire 4 hours. but still). I don't know, it would be really complicated. A freezer is something you can have for more than 10 years. Software ages faster than bananas. Big headache time.

Also, "green" power. Basically, in the Netherlands, you can buy "green" power instead of just power(calling "grey" power from here onward). That would "guarantee" your electricity would come from renewable sources. The way it works is for every MWh of "green" electricity you get a "green" certificate. And green power is just electricity with a green certificate. Strangely, it isn't constrained with space nor time, so in practice many big electricity providers seem to just buy a bunch of them in Norway and just buy coal/gas power instead.

However, if you were to have grey power that time, and you would turn on your array of toasters and vacuum cleaners(you have about a 1000 of these), the first source that should switch on(in theory) would be a renewable one. That's because these are the cheapest. And that would mean there would be more green certificates being produced, so someone else gets green power because you turned on your toasters despite having grey power..? Also if you have green power, and you turn on your toasters when the renewables are maxed out already the first thing that would go on is a coal/gas. It's kind of strange.

From 18:00 onward, solar power decreases and demand started to increase, probably to cook or something, I don't know what people do at electricity rush hour. Which brought prices back not to normal, but at least positive.